4 June 2018: And suddenly there it is – the end of our time in Japan.  After a short hop across the Sea of Japan, we found ourselves in Seoul which seems same same but different.

It would be unfair to describe Seoul as dirty but after the pristine cleanliness of Japan, it just felt that bit grubbier – e.g. the pavements just didn’t seem like they had been scrubbed each night like their Japanese counterparts and you did see some litter.  But really not that much: it was still clean (and would definitely give London a run for its money on this front), just not clean to the Japanese standards to which I’ve now become accustomed.

It also didn’t seem as orderly as Japan albeit the transport still was very efficient.  There was a bit less of a culture of bowing although still quite a bit of that went on.  There was more queue barging in the subway and driving was more chaotic and the Koreans (unlike the Japanese) are familiar with where their car horn is but this was still used pretty rarely (we are definitely not back in India!).  Again, the tendency among pedestrians was to wait at traffic lights for the green man before crossing, but perhaps this was because the driving was a little more aggressive with quite a few motorbikes driving on the pavement just to add to the fun.  As an aside, this was the first country we’d visited on this trip where they drove on the right not the left which meant we had to take a little extra care ourselves. 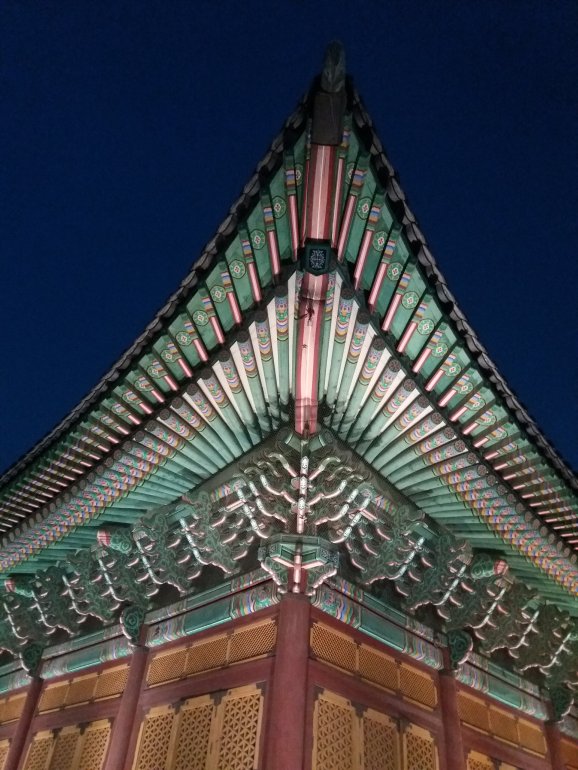 So what else is similar? Lots really but I guess that’s not that much of a surprise given the history of the 2 countries (most recently, Japan occupied Korea from 1910 to 1945 and had previously invaded including in the late sixteenth century). It’s also easy to see the historic Chinese influence too.  To a Westerner, the alphabets look similar (albeit they are different) and some of the traditional architecture (temples and palaces) also seemed similar albeit the dominant religions are different (Shintoism v Confucianism) and the Korean palaces seemed to have more furniture in them rather than just the tatami matting found in so many of the Japanese traditional buildings.  One other similarity in terms of the traditional sights was the fact that in both countries, many of the buildings were actually relatively new reconstructions, so many originals having been destroyed by fire over the centuries. 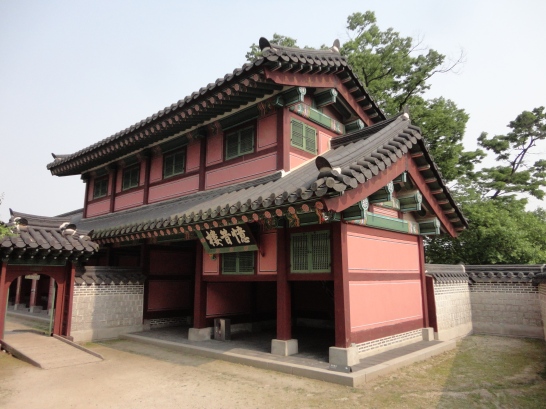 The convenience store reigns supreme in South Korea just like in Japan and indeed some of the brands are the same – 7/11 and Mini Stop.  But there are other local stores – CU and GS25.  Overall, I’d say the Japanese stores were better – they were literally everywhere, larger with a greater range and better coffee machines and also toilets which was a big plus.  Likewise, there are vending machines but again nothing in the quantities that we saw in Japan although I did see my favourite vending machine to date: one selling bouquets of flowers – handy if you’re rushing to a date I guess although I would have been interested to see the condition of what actually came out of the machine.

The passion for dressing up is again much in evidence here.  However, while the Japanese dress in beautiful kimonos and visit the shrines and temples, in Seoul, people dress up in the hambok (the traditional clothes of Royalty) while visiting the Royal Palaces.  But whereas the Japanese took care to complete their outfits and to customise their accessories by wearing getas (wooden sandals) etc., in Korea the dressing up effect was somewhat marred by trainers and other 21st century footwear (or even jeans) poking out of the bottom of the ridiculous meringue like skirts.  The whole effect was quite bizarre anyway: the women looked like moving chess pieces and the men like Pilgrim Fathers and all the costumes looked so highly flammable, I was glad to see no one smoking otherwise there could have been a disaster.  Judging by the accents we heard, it sounded like most people who had chosen to dress up were actually foreign tourists whereas I think in Japan, dressing up was actually quite popular among the local tourists.

Like the Japanese, the South Koreans seem to adore their neon and cute stuff.  There’s more of it in Seoul – on Namsan mountain there were specially demarcated selfie spots for amorous couples e.g. a love bench, a proposal staircase and the opportunity to hang your special “love lock” at a designated place to make sure the world knows how much you love your significant other.  Here, everything seemed just that tinier bit shiner and more neon (and a little tackier and cheaper) than in Japan.  Then, of course, you have K pop versus J pop but I’m afraid the jury’s out on this one as am not really qualified to comment on either. 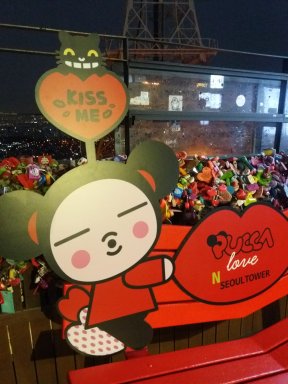 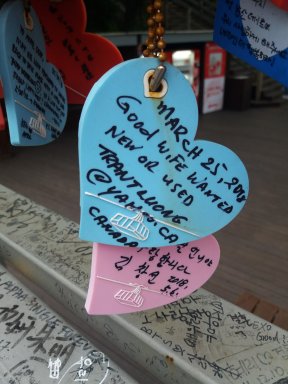 A hot date spot at the top of Namsan Mountain including Proposal staircase which gets you to the view in the middle photo.  R: perhaps a more wistful message than many of the other love locks found on every rail up here

Overall, Seoul was probably a bit easier to visit as a western tourist. Because of the huge number of Americans in the country, English was incredibly widely spoken. It was also a bit cheaper than Japan (again no culture of tipping) and was very easy to use a credit card (unlike in Japan which operates pretty much as an entirely cash society).  In fact Seoul was at the other end of the scale: all credit card transactions seemed to be on a contactless basis, irrespective of amount, which was a little dangerous particularly after a couple of craft beers!

Japan obviously sits in an active earthquake zone and as you walk around, you notice signs and instructions regarding evacuation etc. (in Hokkaido, there were also quite a few references to safe zones in the wake of tsunamis).  In Seoul there were also a number of signs for shelter and in the subway stations themselves, there were often large cabinets of emergency provisions stocked with gas masks etc.  It wasn’t clear to me if the anticipated emergency was a natural disaster or a potential attack from North Korea (or maybe both). 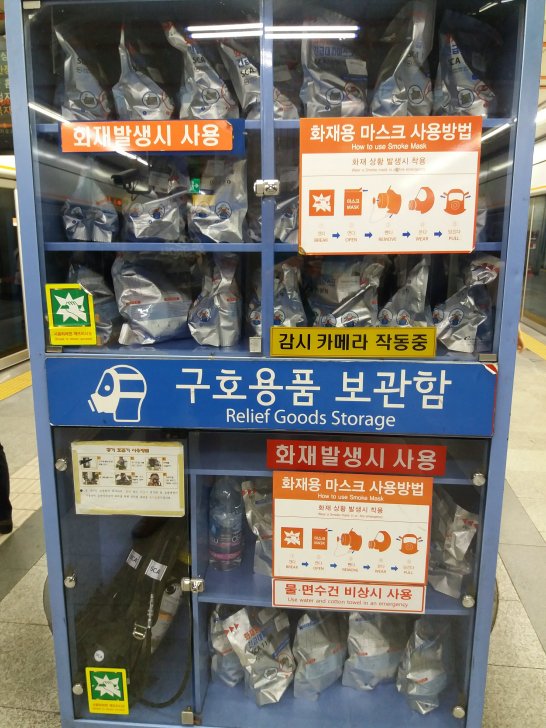 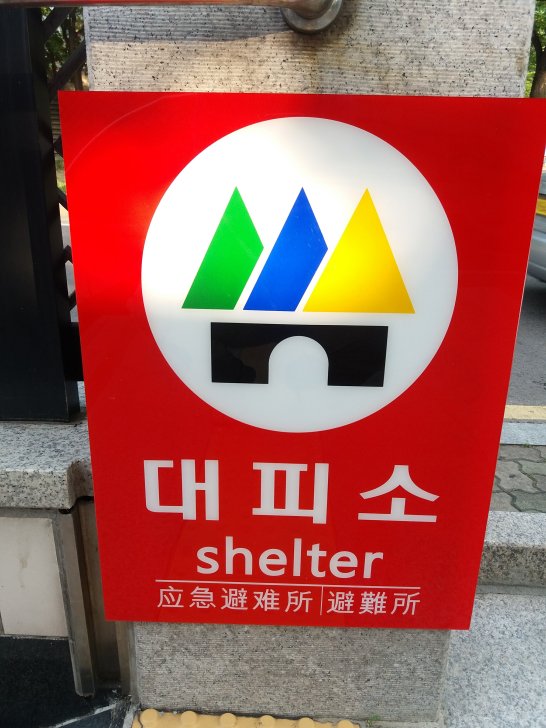 And finally, the toilets: disappointingly while there were a number of hi-tech toilets around, this wasn’t the default style which was a bit of a shame really.  The strange female urinal however did make an appearance in various public toilets though and I’m still none the wiser about its purpose (see Blog post “A private function” dated 20 May, 2018).

View all posts by crockexit